You’ve Heard of THC and CBD. What About CBG, CBN and Delta-8 THC?

Cannabis is So Much More Than THC and CBD

As you probably already know, cannabis is a very complicated plant. You’ve heard about THC, and you’ve heard about CBD. Your main connection with the two most famous cannabinoids is THC gets you euphorically high while CBD does not. For a while, that was all you needed to know. The truth is that there are over 130 identified cannabinoids, all with their own unique properties. 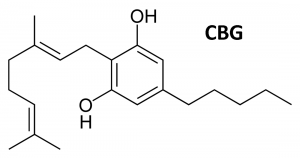 CBG is actually the precursor or mother of all cannabinoids to THC and CBD. What that means is that when the CBG in a cannabis plant is exposed to ultraviolet light or heat, it eventually becomes either THCA or CBDA, which then becomes THC or CBD. Thus, more THC means less CBG and CBD (and vice versa) by nature of how these compounds are synthesized.

Most cannabis strains contain less than 1% CBG, because most of the CBG became something else.

So what’s the difference between CBD and CBG?

CBD, for the most part, does not directly interact with cannabinoid receptors. CBG on the hand, does, just like THC. CBG does not produce any psychoactive effects, and can actually act as a buffer for those produced by THC— i.e. reducing paranoia and anxiety.

We don’t know nearly as much about CBG as we do about CBD and THC, but early studies have linked it to impressive potential therapeutic uses in reducing inflammation, especially in the gut.

Overall, you should know that CBG is non-psychoactive, interacts directly with cannabinoid receptors in the brain, can reduce paranoia and anxiety, is scarce, and has hugely promising therapeutic benefits.

While CBG is scarce, it is by no means unaffordable from a consumer perspective. CBG is on the up and up, so many products have started utilizing it in their formulations— often containing a blend of CBD and CBG in varying ratios. For example, the Bloom Farms Comfort Tincture offers CBD and CBG in a 1:1 ratio.

The cannabinoid that has been getting most of the pub (and perhaps controversy) in recent months has been Delta 8 THC.

The “THC” in cannabis that you usually hear about is actually Delta 9 THC. Yes, that also means that there are Delta 1-7 THC’s. For now, we’ll focus on Delta 8 since it’s been the one doing the rounds and has shown such promising qualities. Delta 8 THC is a different, separate, and quite nuanced cannabinoid.

When referring to CBD, many people jokingly refer to it as “the weed that doesn’t get you high.” When you look at the science, that title may be more appropriate to Delta 8 THC.

Many people complain that they “don’t feel anything” when they first try CBD. We often retort that it’s not what you feel with CBD, but what you don’t feel. If you still think CBD is snake oil after trying reputable brands, then Delta 8 THC may be the cannabinoid for you. The reason for this is that Delta 8 gives you the great therapeutic effects of Delta 9 THC, but without the psychoactive component.

Delta 8 molecular similarities to Delta 9 are such that it allows the user to experience the therapeutic effects without dealing with the obtrusive psychoactive side effects— such as paranoia and anxiety. Think of it as a half-way point between CBD and THC in that it gives a bodily feeling without that “high” feeling.

It has been highlighted as especially effective for eliminating nausea, stimulating appetite, and killing cancer cells. For that reason, early studies have shown Delta 8 to be advantageous in cancer treatment but without some of those psychoactive effects that put some people off. 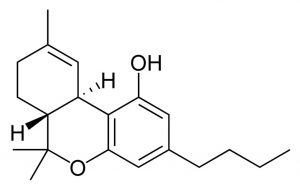 I know we’re going through a few of these things, but let me tell you CBN is worth your while.

Believe it not, THC actually becomes CBN when THC is oxidized. This means that cannabis that has been left out or is a little older usually has higher concentrations of CBN.

While CBN also has shown to have many properties, it is perhaps most famous for being a sleep aid. That’s right, while CBD gets a lot of hype for being good before bed, this little cannabinoid has shown to be better for counting sheep.

Be warned, the early science shows that CBN is not as effective in isolate form in producing this effect than it is as part of an “entourage effect” when coupled with other cannabinoids such as CBD or THC. Many products, like the Bloom Farms Dream Tincture will offer a 5:1 CBD to CBN ratio.

Yes, yes, there are a lot of cannabinoids. We are just barely beginning to understand how they all work together in creating the therapeutic effects our ancestors have known the cannabis plant to possess for thousands of years.

As more and more studies are conducted around the world, we begin to uncover the often mystifying, yet scientific way our bodies interact with these various cannabinoids. We are just scratching the surface to this amazing world being revealed to us.

The cannabinoids that were brought under the microscope in this article, so to speak, are but a few of the the most important that are coming to the forefront. People once thought CBD was a fad, but as we are seeing, not only is it not a fad, but even more of it’s friends are getting increased hype for good reason.

Don’t just take our word for it. Do your own research and try different variations of products to see which ones work with your specific genetic makeup. As always, I am always here to help get you sorted with a free 1 on 1 private consultation.

This website uses cookies to improve your experience while you navigate through the website. Out of these cookies, the cookies that are categorized as necessary are stored on your browser as they are essential for the working of basic functionalities of the website. We also use third-party cookies that help us analyze and understand how you use this website. These cookies will be stored in your browser only with your consent. You also have the option to opt-out of these cookies. But opting out of some of these cookies may have an effect on your browsing experience.
Necessary Always Enabled
Necessary cookies are absolutely essential for the website to function properly. This category only includes cookies that ensures basic functionalities and security features of the website. These cookies do not store any personal information.
Non-necessary
Any cookies that may not be particularly necessary for the website to function and is used specifically to collect user personal data via analytics, ads, other embedded contents are termed as non-necessary cookies. It is mandatory to procure user consent prior to running these cookies on your website.
SAVE & ACCEPT